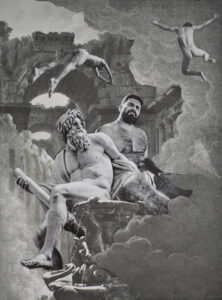 In the infinite beginning, there was everything and the universe was pure fire and expanding.  When it began to cool, the three gods Hydrogenos, Helios and Lithios planted their seeds in the atomic heat. Gravity pulled these primordial elements together and they coalesced to form stars and galaxies.  And the gods watched as the most beautiful of all the galaxies formed which would one day be called the Milky Way. And of all the planets and stars and moons in that galaxy, the gods took a liking to the planet called Earth, for it was here that life emerged.  And they watched with fascination for every day this planet changed. Moisture formed which begat clouds which begat the atmosphere which begat storms and oceans. One thing led to the next. And the gods saw that it was good.

And from the deepest sea, where vents poured hot gas, microscopic life formed and swam.  And the waters began to be filled with life. And some creatures crawled onto the land. And over time the land began to be filled with life. And some creatures took to the air. And the air began to be filled with life. And animals that walked on the land returned to the sea. And species came and went. The circle of life had begun and it was eternal. And the gods watched with fascination at the direction of their experiment.  Like hot wax falling from a candle, curious to see what shape it would next take. Billions of years came and went.  Until one day, that lasted a million years, the gods saw the universe beginning to understand itself. And that was called man.  And man worshipped what he did not control. And what he did not control he called gods. 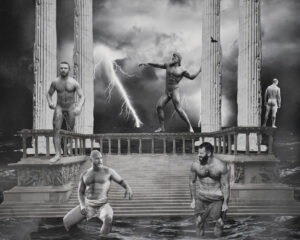 Prometheus, the last monkey who could speak, was crafty and nimble witted and mischievous. And using clay he had sculpted an image like him but more beautiful, one that looked like the gods, the lords of the world. He took both good and evil from the core of many animals and locked them into man. Athene, goddess of civilization saw his creation and was so moved by the beauty, that  she gasped. And when she exhaled, inadvertently brothe life into this creature which until then had only been half alive. 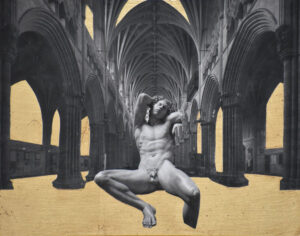 At first man saw but he could not see. He heard but he did not hear. He did not know the art of quarrying and cutting stone of burning bricks from clay or carving beams from trees and building houses from these materials. He lived in caves, wild and without any plan to what he did.  Running this way and that like ants.  Prometheus took pity on them as if they were his children and came to their aid. He taught them to get their bearings by tracing the stars in the night sky, how to count and communicate with written symbols. He showed them how to yoke animals and make them share in man’s labor. He broke horses to the rein and wagon and invented ships for exploring the vast seas.

He taught them how to build remedies from herbs and cure diseases. He taught them how to foretell the future and to study their dreams; to understand what the gods were whispering to them.  He showed them how to look for treasure everywhere and how beneath the soil they might find ore, iron, silver and gold.

He introduced them to all the comforts of living.  Of civilization. And so it was that Prometheus was the first to educate the creations. As men were his children and he educated them, so must man educate his own children. This tradition is sacred and a right.

But Zeus denied the mortals the last thing they needed to perfect their civilization. Fire.

So Prometheus ignored Zeus’s words and stole fire from the sun, hid a spark in a fennel stalk, descended to earth and lit a pile of brushwood.

Pain filled the heart of Zeus when he saw fire rising among men casting its radiance far and wide. 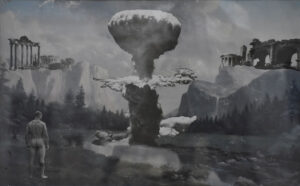 And for only one moment all of human kind put down their spears and touched each other so that every man, woman and child were connected.  Every last one. And there was darkness over all the earth and the sun darkened and the earth shook.  And a tremendous force was released.  And the holy ghost was formed.  And when the collective power of human unity met with the fire, for one brief moment man was equal to Zeus. Because if man can stop fighting, if he can cooperate, he can have the power of the gods.  Because for the brief and miraculous time only when humans can be still in harmony can the force of that miracle, of opening the hearts at once, rival the gods.

And Zeus and the gods, saw the promise of man which was so much like them because they created each other and they took an interest in this creation.  Empathizing with these creatures, the gods were willing to protect him but in exchange demanded that he pay homage.

And so in an ancient land we now call Greece, mortals and immortals met on a set day to determine the rights and duties of man. Prometheus appeared as man’s council to ensure that the gods did not impose too burdensome levies on his tender children, on his imperfect creations.  With rights come duties and responsibilities.  After quarreling and debating, the gods and man decided on these harmonies.